It's a cheese tart that's been so popular throughout Asia. Originally inspired by Hokkaido's dairy products and originated in a bakery in Sapporo, Hokkaido.

They are really something not to miss out. The tart crust is flaky and the cheesy filling is creamy.

Making These Tarts in Spain

Yes. I've never been to Hokkaido or Japan myself. I would love to, one day. So obviously I'm not using Hokkaido's dairy products nor the original bakery's recipe. This is my take on the ohhh-so-famous-and-yummy Hokkaido cheese tarts.

I first heard of the tarts like 2 years ago from my sister. She sent me a photo of the Hokkaido cheese tarts that she bought in Malaysia. She was raving on how delicious they were and I thought ok, that cannot be. I simply have to taste it. That means recreating it.

So today I'm sharing my take on it with you.

I'm using local dairy products from Spain. Actually all of the ingredients are from Spain. My point is, you can still enjoy these delicious tarts wherever you are. I'm so passionate about limitless cooking. Cooking should not be bound to certain places and ingredients. It should carry the same freedom as life does, and adaptable to where we are. That's the beauty of cooking.

This recipe is simple even though you have the crust and the filling components to tackle. I'm adding lemon zest in the crust as it just brings the taste to another level. Just a note though. Where I am now is super hot in the summer.

So that's why I'm chilling the dough for a while so that it's firm enough to handle before pressing it into the tart moulds. If you don't have that problem, by all means skip the chilling process.

I do say to place the unbaked crust in the freezer for a while though. With this type of crust it's always good to have it cold before baking. More when we've been manipulating the dough a lot when pressing into the moulds.

After piping the filling into the baked shells, put them in the freezer until the filling is firm enough to the touch. Why? Because we will be brushing the top with some egg yolk and it's going to be too soft to directly brush on it without putting in the freezer for a while.

The filling is pre cooked as a custard before we grill it. So it won't take long. Just enough to get that beautiful slight charred looks.

So I know what I would be serving my sisters when they come to visit. And if they don't put it in writing that my Hokkaido cheese tarts are the best in the world (muahaha!) then they might be spending the night in the roundabout across the street. Ha! 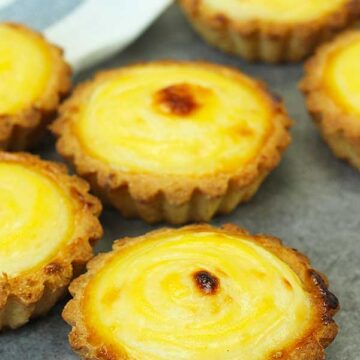