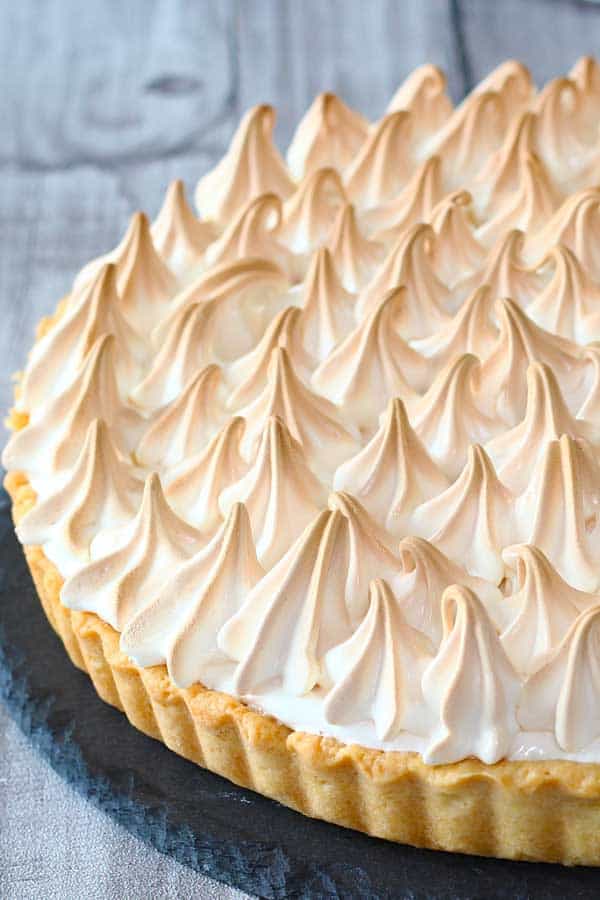 To tell you the truth, I’ve never tried lemon meringue pie until I met my husband. His family and him are very into sweets and they’re amazing in making sweets and desserts.

Actually this recipe is my husband’s recipe. He has it since he was in the university and over the years he has been perfecting this recipe. He’s even known amongst his family and relatives for his lemon meringue pie.

Anyway, ever since I’ve tasted it I was in love. Yes I still love my husband but this lemon meringue pie is difficult to resist. I’ve been learning from my husband on how to make this pie and now I’m the one who’s making it for our family. He still gets the fame though..oh well.

If you know or have tried lemon meringue pie then you will notice that there are different types of base for it. There’s no right or wrong in this as of course everybody has their own preferences. Live life, be free. Don’t you agree?

As for this recipe, the texture for the base is in between a cake and short crust pastry. It has that soft cakey touch to it and at the same time holds its own firmness. Makes any sense? Of course it does!

I will tell you that the dough for this base is a bit soft and sticky. But don’t worry. I totally understand if you get panicky upon hearing that or while you’re touching the dough. Why? Because I was like that when I first made it.

Though it’s like that, it is extremely forgiving. Meaning if it breaks or fall when you move it, you can simply pick up the pieces and patch them here and there. Trust me, I’ve done that more times than I can remember.

For this recipe video, I’ve came up with a method so that it would be not so nerve wrecking if you’re trying to make it for the first time. What I did was roll the dough between 2 cling films. Using the pie pan that I was going to bake the pie in, I rolled it slightly bigger than the pan. Just to consider the depth or the height of the pan.

Then I uncover the top cling film and sprinkle some flour on the dough. I spread the flour evenly on its surface. I did that so that when I flipped it into the pan I can easily adjust or move it without it being stuck to the pan. Then I simple uncover the other cling film and start patching the dough here and there.

The ingredients are eggs, water, lemon juice, corn starch and sugar. So you basically have to cook it until it thickens and leave it to cool before using it.

For this recipe the ingredients are only 3 things which are condensed milk, eggs and lemon juice. You just whisk everything together and it’s ready in 1 minute. You don’t need to cook it before hand. You cook it together with the base. Both the filling and the base will be perfectly cooked at the same. Convenient, right?

As for the texture and taste, I love this version better. I’m not being bias (or am I?) because I’ve tasted the other version many many times when we traveled to France and for me, my husband’s version is creamier and tastier.

Creamy, sweet with that tangy taste to it. That’s how I would describe it. That creamy sweet taste is thanks to the condensed milk.

Like the other two components of this pie, there are different ways to make meringue for it. I have been experimenting a lot and one thing I would advise is not to use the typical normal meringue. Where you just beat the egg whites with sugar until stiff peaks? Yea that one, try not to use it.

Why? Because I find that after a while it leaks liquid and make the base of the pie all moist and damp. It also shrinks a lot when you grill it in the oven for that final char touch. And it also doesn’t hold it shape that good. Well those are reasons for me personally not to use it.

I’ve also tried Italian and Swiss meringue. The one that I love the most is this Swiss marshmallow meringue. Yep. Imagine meringue with that marshmallow texture. The golden syrup is what giving it that texture. Yup yup yup!

It’s all that it’s not from the typical normal meringue. Try it, you might like it too.

Well while you’re at it, try the whole lemon meringue pie won’t you? 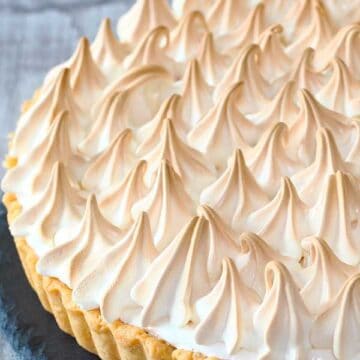 To make it easier to move around the removable bottom pie pan, I always put it on a baking tray.
Tried this recipe?Mention @elmundoeats and tag #elmundoeats!
« Braided Nutella Star Bread
Slow Cooker Spanish Oxtail Stew »