Tall, soft and fluffy panettone, slightly sweet bread with candied fruits and almonds, with a hint of orange and lemon. Amazing! And we're talking about homemade panettone using just a handful of ingredients that we already know.

Don't be intimidated by making your own panettone at home. Seriously, it's not as difficult as you think. I've been making it for years and I'm here to help you.

I've put together all the tips and tricks that I've gathered all these years so that you don't get overwhelmed. Enjoy the process, it's so satisfying, fun and rewarding at the end!

If I still can't convince you to give this a try, perhaps you'd want to make mini-sized panettone? My mini chocolate panettone is so delicious and easier to make.

I have more recipes for the holidays like this classic fruit cake, 3 kings bread and also this irresistible Nutella babka buns!

Brief information about this delicious bread. This sweet bread is originally from Italy and is usually made for Christmas or New Year in countries like USA, Australia and Canada. It's also widely common throughout Europe.

The word panettone came from panetto, which means small cake. Since it's nothing of a small size, so the word was adjusted by adding one at the end of it, which accurately means large cake.

Panettone is known for its tall-domed shape and its light and fluffy texture. The process involves rising the dough 3 times to achieve its signature characteristics. Over the years there've been varieties of shapes and flavours of panettone but the classic one like what I'm showing you today remains the favourite.

Bread flour - A must. In some countries it's also called high protein flour (around 12-13 g protein/100 g). We want to develop the gluten as much as we can, with all the kneading and bread flour is the key. Well developed gluten means soft, fluffy, good structured breads.

Citrus - I love the combo of orange and lemon zest. Even the raw dough smells amazing. You can make up your own combo. Clementine is great also.

White sugar - I choose good old granulated white sugar so that it doesn't affect the bread's colour, if I were to use brown sugar, for example.

SUBSTITUTION: Use brown sugar, coconut sugar or any dry sweetener of choice.

Orange juice - To soak the raisins and also infuses the dough.

Almond - Any nuts will do, preferably toasted for better flavour and texture.

Yeast - I've used active and instant yeast interchangeably and have no problems. If you're using instant yeast, you don't need to activate it first, just throw it in with the flour.

Plan ahead - Panettone takes hours to make but with lots of waiting time. This recipe is with 3 proofs (dough risings). I'd recommend you to clear 1 whole day for it.

Correct measurement - I'm a strong believer in kitchen scale. It's the only accurate way to weigh dry ingredients. And in this recipe, we don't want extra flour which usually happens when you use cup (volume) measurement. Baking is science, everything needs to be precise. Although, in all my recipes I do write them in both measurement, for your to choose.

NOTE: Use the scoop and level method, if you're using cup measurement.

Prepping - Read the recipe carefully, at least 1 day before you make this. Soak the raisins the night before, chop the candied fruits and nuts and have them ready. I highly recommend weighing all ingredients the night before and having everything ready, so that the next morning you start early. No time wasted.

What I usually do is heat my oven at 75ºF (23ºC) for 2-3 minutes and then turn it off. I let the dough rise inside the oven (bowl tightly covered, placed on a wooden board). Now and then I place my hand in the oven just to check, if it feels cold then I heat up my oven again. I find this very helpful to create a steady continuous warm ambiance for the dough to rise beautifully.

Standing mixer - People back then made panettone using their own bare hands. These days to make life easier, I'd really recommend you to use a standing mixer. It's going to save time and energy (haha!). Also, the dough is very sticky, so using a standing mixer will definitely prevent you from getting panicky and overwhelmed while dealing with the dough.

No extra flour - Like I mentioned earlier, this is a sticky dough and a bit tricky to manipulate. Do not add extra flour as it'll make the panettone dense. Oil your working surface and your hands to prevent the dough from sticking. Remember, no extra flour.

How To Prevent Panettone From Collapsing

What I do is insert 2 metal skewers through the panettone while it's still hot and carefully hang it upside down on stacks of flour containers. Usually, it takes 3-4 hours to it to cool.

How To Make Panettone

The 1st rise - Add all of the ingredients for the first rise in a standing mixer bowl. Mix well and then knead for 10 minutes. Cover the bowl tightly with cling film and leave until the dough rises double its size.

The 2nd rise - Punch the dough to let the air out. Add egg yolks, sugar and vanilla extract and mix well. While mixing, the cubed butter bit by bit until they're all incorporated. Then knead the dough forms a ball. This will take around 20-30 minutes. Cover the dough tightly with cling film and leave until the dough rises double its size.

The 3rd rise - Grease your working surface. Pour the dough on it and stretch it into more or less a square shape. Sprinkle candied fruits and almonds on top. Gently knead the dough to distribute them evenly. Fold it into an envelope, flip and place it inside the panettone mould. Cover loosely with cling film until the top dome reaches almost 1 inch to the brim of the mould.

Bake - Gently brush the top with some egg wash. Using a sharp knife, make a shallow cross on top. Place some slices of butter in the cross. Bake at 360ºF or 180ºC for 60-60 minutes, or until a skewer inserted comes out clean. Cover loosely with aluminium foil it the top browns too fast.

Flip upside down - Once removed from the oven, immediately poke 2 metal skewers through the panettone. Gently flip it upside down and leave it to cool completely for 3-4 hours before slicing.

Serve - Best consumed on the day like any other fresh homemade bread. Cut into tall wedges to serve with some sweet drinks or wine.

Can I use all-purpose flour?

Nope. All-purpose flour is low in protein content and will not be able to produce tall, structured, fluffy panettone.

Can I use whole-wheat bread flour?

This is a classic recipe that I've been making for years without changing it. Whole-wheat flours tend to absorb more liquid so adjustments and testings have to be made to the recipe, which I haven't done. So nope, use regular bread flour.

Do I really need to flip the panettone upside down?

Yes! It's important if you want that fluffy texture of bread in this. Since it's such a tall bread, this step also prevents it from collapsing on itself.

I love my bread warm, can I directly cut it when it comes out of the oven?

Nope. Cutting it while it's still warm will give the impression that the panettone is not fully cooked and the texture is dense. Wait until it's totally cold, it's worth it. 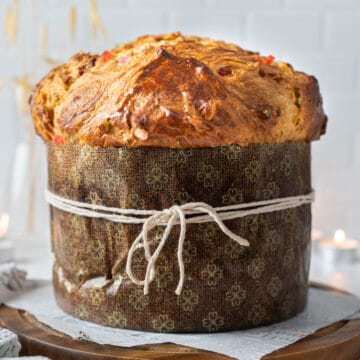