Chicken rice is a very well known and loved meal in Southeast Asia. There are of course many variations of it, according to each country. If you have tried any chicken rice dish, maybe you would remember Hainan or Hainanese chicken rice. Very delicious!

More when I see I'm limited with time and yet we want to indulge in our chicken rice feast.

The Chicken And The Broth

First we will prepare the chicken and the broth. The broth is going to be used for cooking the rice, as a soup and in our sauce.

I used free range chicken for this recipe and it was around 1.7 kg. A medium sized chicken I would say. First I cleaned and scrubbed the skin with some coarse salt. This is to take out any impurities on the skin and it also makes the skin looks brighter.

Or is it just me? I tied the legs together so that it would be easier for me to handle. One tip, if you haven't known it already, tuck in the tip of the wings under well.. the wings themselves. This is to prevent them wailing around in the pot.

There's not an exact amount of water used for cooking the chicken and making the broth. But it's going to be more or less the same. Find a pot that fits nicely for your chicken and fill it with some water. Bring it to a boil.

When it started to boil, then add in the whole chicken, salt, sliced ginger and coriander stems. I tied them together so that it would be easier to take them out later. Originally, coriander roots are used but since I didn't have any so I used the next best thing, the stems. Add more water just until covering the chicken.

I cooked the chicken on low heat. Very gently simmer. This is to preserve the chicken skin and make it plump. As you can see, the cooked chicken looked equally fresh, intact and with beautiful skin.

The reason to pay such importance to the skin is because for this meal, the chicken is served with its skin. The same with Hainanese chicken rice.

I cooked my chicken for 30 minutes. The time varies depending on the size and the heat used, of course. After it was cooked, I carefully took it out and put it on a plate. I didn't want it to continue cooking in the hot broth.

I brushed the whole chicken with a bit of oil, just so the skin didn't get dry. For this meal, we will serve the chicken at room temperature.

After done with the chicken, I took out the sliced ginger and knotted coriander stems from the broth. I saved the broth as I will be using it later to cook the rice, preparing the soup and the sauce.

One tip. When the chicken is cooked, I put my basmati rice to soak. As I only needed it to be soaked for 20 minutes, it would give me enough time to proceed with the rice preparation meanwhile.

For me, the essential component in cooking this Thai chicken rice is the fried garlic. LOTS of them. Combined with the chicken broth and fried garlic, the rice released such an aromatic smell that you will know it in your heart that it was going to be great!

I used 1 head of garlic and chopped them. Not too fine as I wanted the garlic to be visible in the rice. I simply fried the chopped garlic in my wok, with quite lots of oil. Well just enough to do the frying, you get what I mean.

I kept on stirring them so that they didn't stick to each other and so they cooked evenly. Then I remove them from the oil and set aside while I proceeded on with my rice.

I like to use casserole pan for its width, as this ensures the rice to be cooked evenly. Using medium heat, I let the chicken broth came to a boil. Then I added my previously soaked and drained basmati rice into the pan with some salt. Then went in the fried garlic.

I gave it a quick stir so that everything was mixed together and let the broth came to a boil again. Then I reduced the heat to low and cooked the rice for 15 minutes. I have an induction stove in my house and I used heat level 2.

When the rice was cooking, the smell was incredible! The whole house smelled so aromatic. After 15 minutes the rice was cooked, like always I just gave it a quick fluff all over and cover the lid back on.

The soup was so easy that I feel it needed no recipe for it. I measured just 1 liter of chicken broth that I saved earlier and put in into a pot. Then I added some salt, black pepper and some coriander leaves. I simply heat the soup, I didn't boil it. It didn't need it.

I simply use my food processor and blend the coriander leaves, the stems, ginger, garlic, Thai red chillies together with black bean sauce, soy sauce, rice wine vinegar, some chicken broth and salt. It was that easy!

You can adjust the heat by adding or reducing the amount of Thai red chillies. I didn't make my sauce Asian level spicy as my husband hasn't reached that level yet.

The normal way to serve the rice is to put it in a bowl, slightly press it and flip it onto a plate. This will create a beautiful small mountain rice shape. I cut out one chicken breast from the whole chicken, carefully not to break its skin.

Then using a cleaver, I press down the chicken breast so that it was a bit flatter. Then I sliced it and place it alongside with my rice. I added some cucumber slices too.

I served the soup and the sauce in separate bowls, on the side. Simple and straightforward recipe, don't you think? If you ever wanted to try a refreshing chicken rice dish, do consider this Thai chicken rice dish. I think (and hope) you're going to like it!


Note: The amount of chicken broth should be 3 cups, not 6 cups as put in the video. Type error. Sorry for the inconvenience. 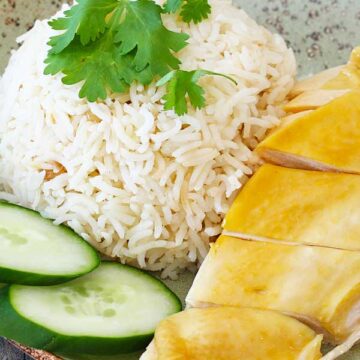