A foolproof recipe for the traditional Argentine Empanadas with homemade pastry. I say foolproof because since I'm an Asian and even I can whip these up, serve to my Argentinian family (who like anybody else towards their home country food, are very detail) and they love it!

My mother in law had tried several times to make homemade empanada pastries with no success and after she watched this video she tried the recipe and she was happy with the results! I think when I heard that, I was more excited and happier than she was.

The filling, of course you can adjust it and give it your personal touch.. they way everybody likes it in your house. The recipe is so versatile and straight forward that I know this is a keeper for me. 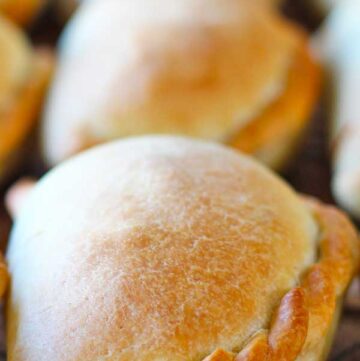 A foolproof recipe for the traditional Argentine Empanadas with beef filling and homemade pastry. These empanadas are baked, making them healthier than the fried ones. Try them!
5 from 2 votes
Print Pin Rate
Servings: 20 empanadas
Prep Time: 40 mins
Cook Time: 1 hr

If your place is too hot (like mine in the summer), place the balls of dough in the fridge and take out 2,3 balls at one time to work with. This is to prevent them getting overly soft thus making it challenging to work with.
Tried this recipe?Mention @elmundoeats and tag #elmundoeats!
Previous Post: « Milky Arab Cookies
Next Post: Easy Spinach and Ricotta Pie »