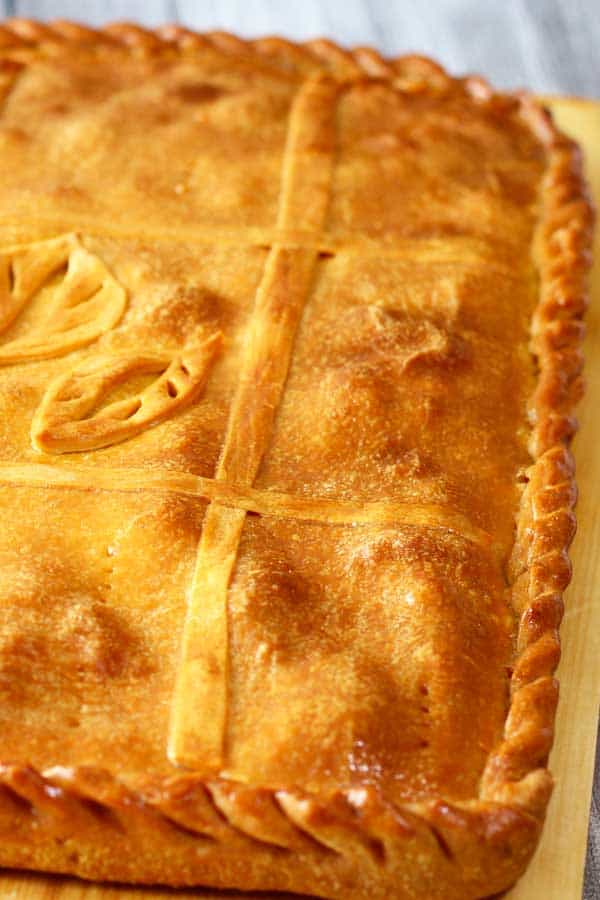 Yes, the key component for this recipe is the oil. Used both for the filling and the dough. How? This recipe will use quite a lot of oil when cooking the filling because after that we will drain the excess oil from the cooked filling, and then use it in our dough. Sounds flavourful, don’t you think 🙂 ? 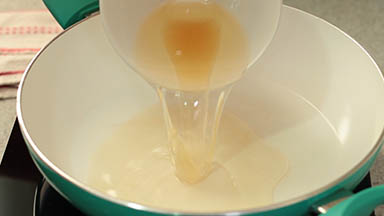 To make it even more flavourful, I used the oil that came in the canned tuna. That oil is already packed with tuna flavour. So what I did was, drain the tuna and then measure the oil that I needed. Some of the tuna juice will be mixed with the drained oil but no problem. More flavour!

The sofrito and the filling

Here in Spain the vegetable base in a recipe is always referred to as el sofrito or stir-fry if you translate it. In this recipe I refer it as the base for the filling. The base was very simple, believe it or not.

I simply cooked cubed onion, red bell pepper, green Italian pepper, garlic and some salt in the tuna oil. I used quite a lot of onion because this will help make the filling juicy. 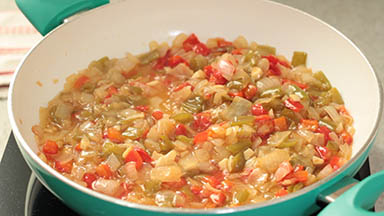 I cooked them on medium heat, stirring now and then. It took me around 30 minutes to get to that point (as shown in the picture). 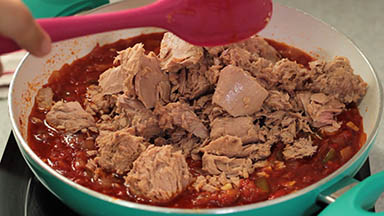 After the base was done, I added some spices. Sweet paprika, spicy paprika and black pepper. I cooked them for 30 seconds just so that the powdery taste was gone.

Then I added the canned crushed tomato and some sugar. Both paprikas and the tomato, apart from giving flavours, will also give color to the filling and the oil (which we will use later). I cooked the mixture for another 10 minutes. 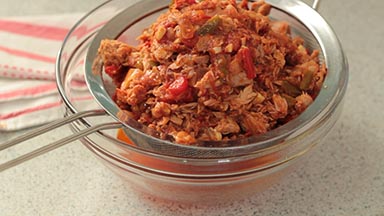 Then I turned the heat off and added the previously drained tuna. I gently mix everything together because I didn’t want the tuna to get all broken and mushy. 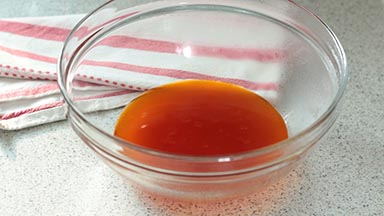 While still hot, I pour the filling into a sifter with a bowl underneath. This is to drain the oil from the filling. I let the filling drain just for a few minutes because I didn’t want the filling to get dry. After that I put the filling in a container and let it cool completely while I proceeded with the dough.

As you can see in the picture, there was quite a lot of oil that I drained. As I mentioned earlier, that’s why we needed to start this recipe by using quite a lot of oil. Now we will measure that flavourful and vibrant color drained oil for our dough. Discard the balance.

For this recipe I used my homemade pizza dough recipe for this dough, with some adjustment. I used my stand mixer to make things easier 🙂 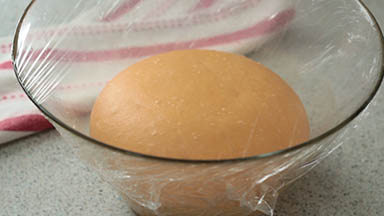 I let the dough rise to double size in a warm and draft free place. It looked beautiful! 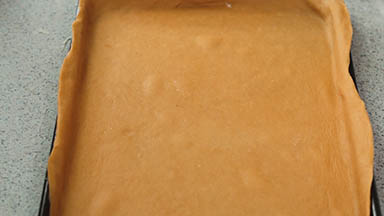 I took half of the dough and rolled it into a rectangle more or less the size of the pan that I was going to use. I rolled it bigger to consider the depth of the pan where we will be putting the filling. The dough will be thin, don’t worry about that because that’s how it’s supposed to be. It should not be thick.

I adjusted the dough to fit nicely the pan with the dough overhang a bit to the sides. 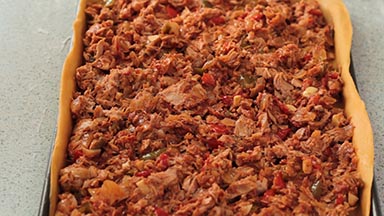 Then I spooned in the cooled tuna filling on the dough and spread it evenly. I love it when I can see chunks of tuna in the filling. Not just a mashed version of it.

Then I took the other half of the dough and rolled it out, the same like I did before. I placed it on top of the filling and cut out the excess dough. I kept the excess dough aside as I wanted to use it for a simple decoration later. I pinched the seams together all around. Simple, don’t you think? 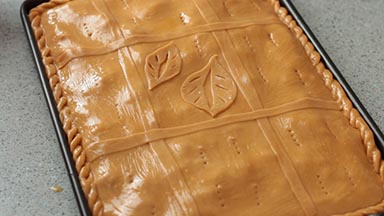 I made some simple decorations with the excess dough and then painted the top surface with egg wash. Then using a fork, I poked some holes all over the top surface. This will help to release the steam while baking.

I baked the tuna pie at 400ºF (200ºC) preheated oven for 20-30 minutes. It didn’t take long as the filling was already cooked. I just wanted to bake the dough and look for that beautiful golden color, as you can see in the picture.

That’s it for the Spanish tuna pie recipe. Not difficult at all. It did take a bit of time as I couldn’t prepare the filling and the dough simultaneously.

Watch how to make this Spanish tuna pie in the video below: 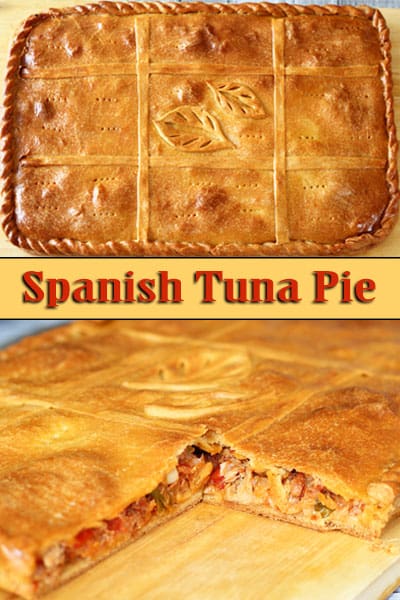 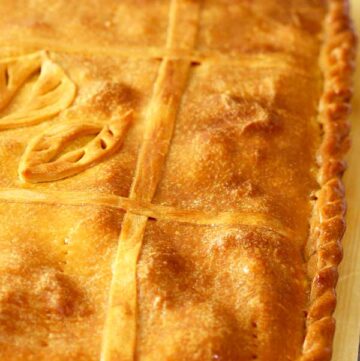