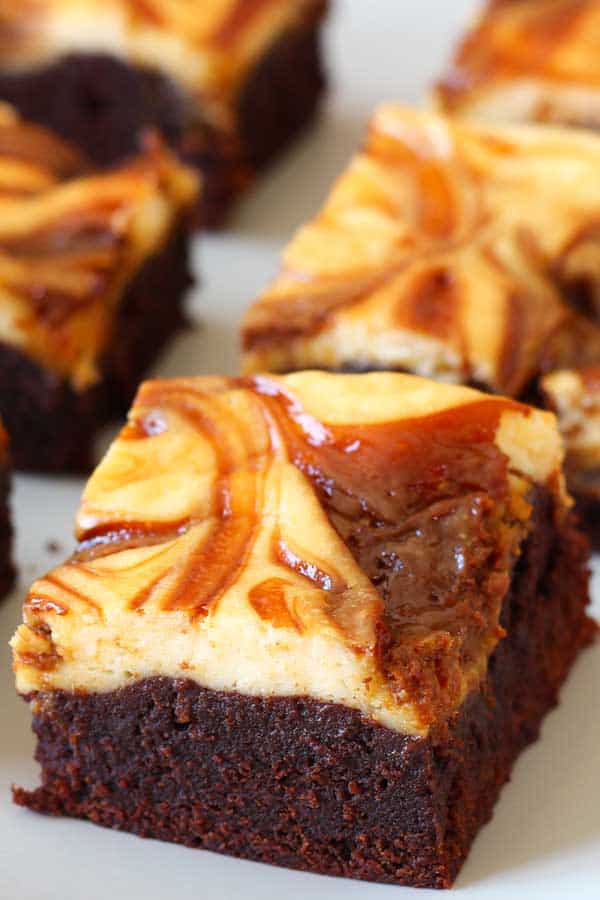 Dulce de leche is made by cooking milk and sugar and until it's reduced into a thick paste with luscious darker caramel color. That's how it's traditionally made in Argentina. It has a very smooth and oh extremely creamy texture. The taste? Sweet caramelly milky and creamy. Heaven!

Some people who don't have access to dulce de leche make their own. The method is not really authentic but it can be done. They place canned condensed milk into a pot of water, with the water totally covering the can. Then they boil it for a few hours, adding more water as needed. You can read more about this method here. 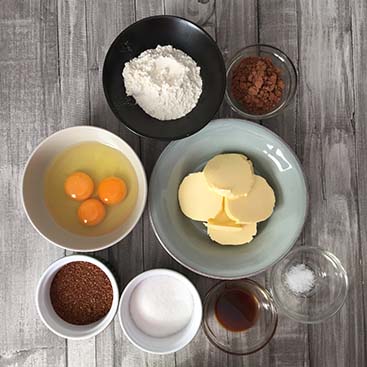 So in this recipe we will be making 2 layers of goodness. First is the brownie layer and second is the cheesecake layer. Which, later we will load it with lots and lots and lots of dulce de leche. Go big or go home, right? 😀

I used two different types of sugar in this recipe. I feel using brown sugar gives it that molassy taste. You can of course, simply use white granulated sugar. But if you can, try it with brown sugar 🙂 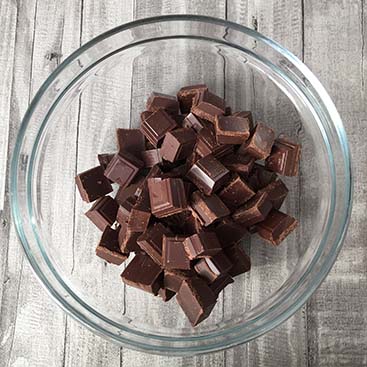 What I did for this brownie layer was extremely simple. First I sifted the flour, cocoa and salt into a bowl. I set them aside until later. Then in another bowl, I added the unsalted butter and both of the sugars. I whisked them just until they were fully combined.

I didn't want to whisk them for too long because this was not a cake that needed all the air. After that I added the eggs and vanilla extract. I make it a habit to use my eggs in my bakings, at room temperature. Then I mixed everything together, just until well combined also. No over mixing or anything.

Then came the chocolate. I simply melted the chocolate in microwave at max for 30 seconds at a time. Each time that I took it out, I gave it a stir. After adding in the chocolate, I immediately mixed it into the batter.

Just enough mixing to combine everything. Finally, I added the previously sifted flour mixture into the bowl. Again, I just mixed it well enough until everything was combined. This is to avoid the brownie to be hard and tough, we don't want that. 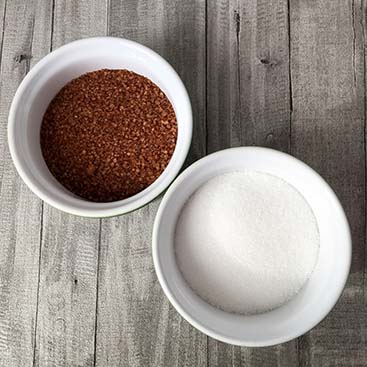 Well, then I simply poured the brownie batter into a 9 inch (23x23 cm) square pan. I first greased and lined the pan with baking sheet. I purposely make the baking sheet over hanged on the sides so that I could grab it to remove the brownie later.

When we were filming this part where I was pouring the brownie batter into the pan, my husband (he's the cameraman in our team of 2 people: him and me 😀 ) went ¨Ahhhh.. that looks so goooood!¨. Haha!

Anyway. I spread the batter evenly and set aside while I started with the cheesecake. 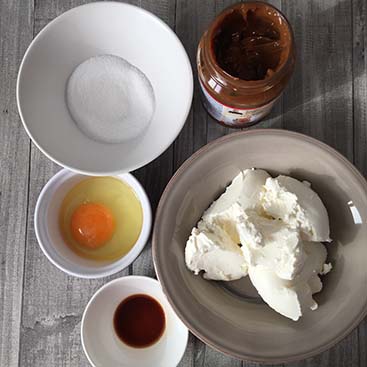 For this cheesecake layer, I didn't want it to be that thick. I just wanted the taste enough to come through and not overcome the two main components in this recipe. Decadent chocolate brownie and sweet caramelly dulce de leche.

What I did was, first I whisk the cream cheese until it was creamy. This time I didn't leave my cream cheese at room temperature because I didn't want a result of too soft batter. After that I added the sugar and mix just until well combined. Finally I added the egg and vanilla extract, and gave it a quick mix just to combine everything.

Then I poured the cheesecake batter on top of the brownie batter and spread it evenly. 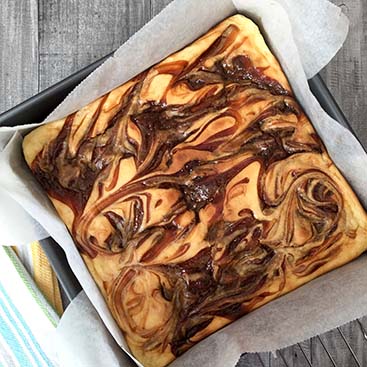 I used LOTS of dulce de leche! That's how we roll 😀 . I randomly spooned dulce de leche all around on top of the cheesecake layer. Then using an offset spatula I just made simple swirls.

I did take care not to mix until the brownie batter. I just made the swirls on the cheesecake layer. Then I gave the pan a few shakes, just to let everything settle in.

I baked this dulce de leche cheesecake brownie at 180ºC (350ºF) preheated oven for 40 minutes. The way that I checked if it was done or not was by inserting a knife into it.

I waited until it was completely cooled before I removed it from the pan. Well then the rest needs no more explanation. Just slice and enjoy! 🙂  This recipe yields 16 decadent pieces. Just saying 🙂


Watch how to make dulce de leche cheesecake brownie in the video below: 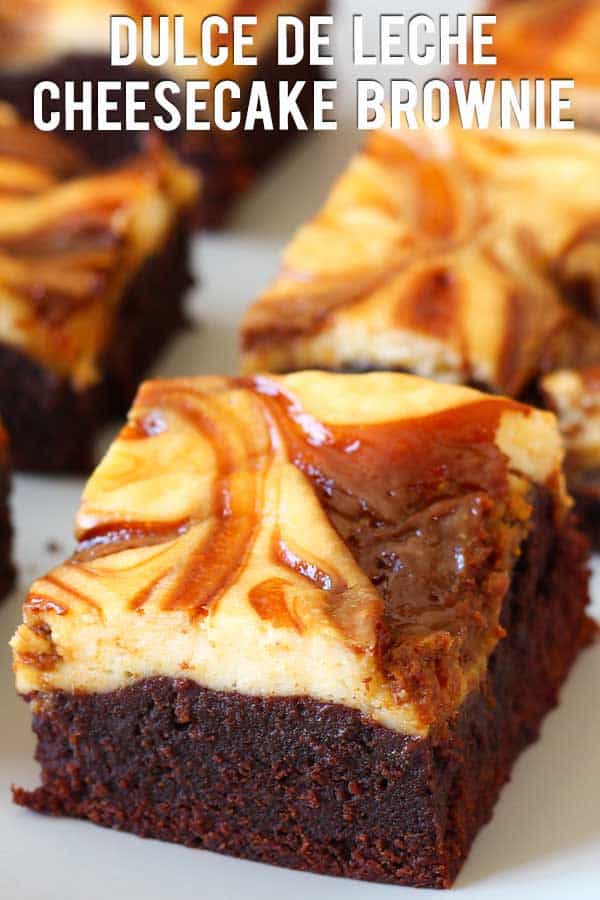 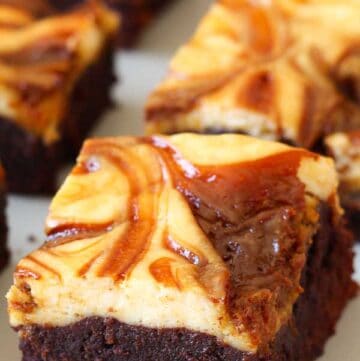 A decadent moist chocolate fudge brownie with a layer of cheesecake and LOTS of dulce de leche to indulge! Anything that you would want in a brownie recipe.
5 from 5 votes
Print Pin Rate
Servings: 16 pieces
Prep Time: 20 mins
Cook Time: 40 mins
Total Time: 1 hr