A hot bowl of chewy bouncy egg noodles served with juicy wontons, piping hot broth and a few leafy greens on the side. Close your eyes as you take the first sip of the broth. It's like heaven, I'm telling ya!

Marco always says I can whip up a soup out of anything, anywhere. Haha! It's because I LOVE soups so much (more than I love rice, yikes!). So it makes sense that I share this quick and easy recipe with you.

This is such a comforting, feel-good, pick-me-up food. I always feel good after enjoying a bowl of this goodness. Especially in cold weather, all cosy up under a blanket with Netflix on.

If you love soups as much as I do, then you might want to check out my 30-minute chicken ramen, quick laksa curry or lemon ginger chicken soup, for starters.

This is one of the many delicious dishes from China. The name of this dish describes its components perfectly...well, plus one more. So we're talking about 4 basic components that make this bowl of deliciousness!

Wonton - The filling is usually a combination of shrimp and pork, with shrimp as the main ingredient. Then you'll have the other basic dumpling ingredients and seasonings like green onion and soy sauce. You'll want the wontons to be juicy, with clean flavours.

Noodle - Egg noodles that are cut thinly. I make my own chewy and bouncy egg noodles in a stand mixer, and I'm telling you, it's so easy to make!

Soup - Or broth. It's just a simple clean flavoured broth. The reason is that you don't want it to overpower the flavours of the egg noodles and the wontons.

Greens - Typically it's gai-lan or also known as Chinese broccoli. It adds fresh touches to the dish, plus the whole bowl looks more inviting with the vibrant green colour.

Soy sauce - Use less sodium soy sauce. This way you can use more for the extra flavour without worrying about the extra salt.

Oyster sauce - I've said it before and I'll say it again. Oyster sauce is a must-have in your pantry if you love cooking Asian food. It adds that umami touch to any dish.

Shrimp - This recipe yields around 50 wontons. I'd highly recommend you find fresh raw shrimp instead of frozen ones. This way you can freeze the wonton balance to enjoy some other time. Do not re-freeze thawed raw shrimp (or any protein source) as it might cause food poisoning.

Greens - As I mentioned earlier, the typical green in this dish is gai-lan (Chinese broccoli). I'm using baby pak choy as it's almost the same.

Wonton wrappers - I'm using store-bought ones for this recipe. If you want, you can make homemade wonton wrappers. It's easy, you know!

Egg noodles - As I mentioned earlier, I make my own egg noodles using a stand mixer and it has never been so easy! Chewy and bouncy. One of the star components in this dish, so we want the best! And ohh... use thinly cut ones as they're more suitable for soups. If you don't have a stand mixer, you can make them by hand with this recipe.

How To Make This Recipe

How To Wrap Wontons

Tips For This Recipe

Serve - Serve immediately, and make sure the broth is piping hot.

Store - The wonton filling lasts for 3-4 days in the fridge. I recommend wrapping the wontons just before you want to boil them. Freeze the balance of wontons. Place them on a tray lined with parchment paper in the freezer for 1 hour. Then put them all in a ziplock bag. They last for 2-3 months.

Can I use dry egg noodles?

Yes, you can. Try to find the thin ones, they're more suitable for soups.

Can I use store-bought wontons?

Of course, no problem at all. Just try to find ones with shrimp or have more shrimp than the rest of the ingredients. 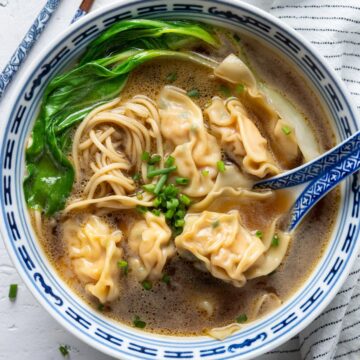 A hot bowl of chewy bouncy egg noodles served with juicy wontons, piping hot broth and a few leafy greens on the side. The easiest broth and wontons, and they're so flavourful!
5 from 1 vote
Print Pin Rate
Servings: 4 people
Prep Time30 mins
Cook Time25 mins

Nutritional facts are calculated with 4 wontons/person.