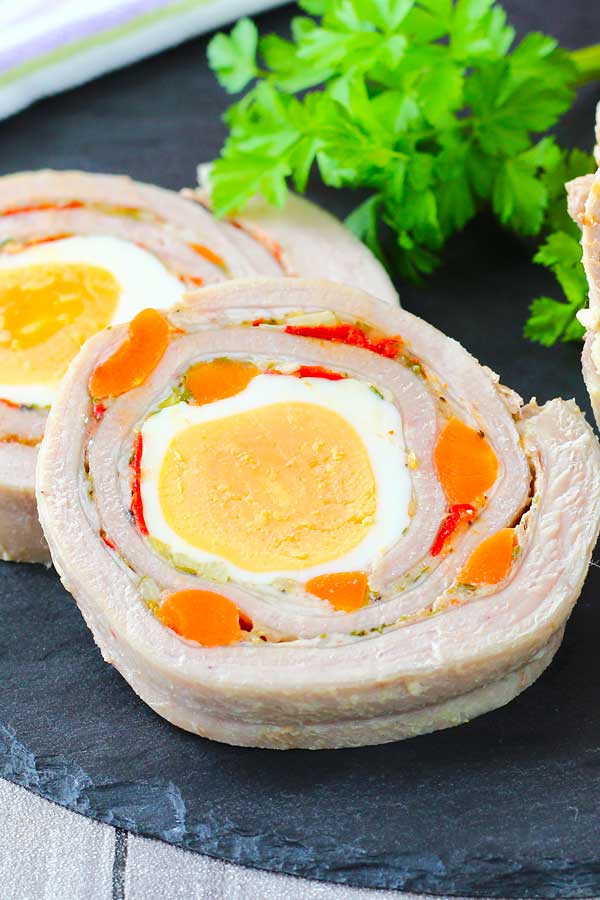 Matambre comes from the Spanish word "matar" means kill, and "hambre" means hunger. So it's said that it's a dish that kills-hunger. Well it's true, you wouldn't be hungry after eating this.

Matambre is a famously known traditional dish in Argentina. It's a rolled meat stuffed with hard boiled eggs, vegetables and condiments. The rolled meat will then be cooked either by boiling or roasting it. It is then sliced, showing the beautiful filling inside and served at room temperature.

The meat cut used for this matambre is the thin layer of meat that covers the ribs of the cow. In Argentina that cut is also known as matambre. It is of course known differently in other countries.

My husband and his family have always eaten this matambre for Christmas, together with tuna pionono and vitel tonne. Those have been traditional meals in the family. Tradition always comes with memories. And memories are always cherished in our hearts.

I have been curious about making matambre for quite a while. One day a few years ago, my mother in law told me that my father in law went and bought the meat from our local butcher. She had prepared all the ingredients and wanted to show me how to make it. I got very excited, of course. So I learnt and I thought I'd share it with you now.

The meat comes in a roll. The shape is not perfectly square or triangle. The thickness is not all the same also. There's usually more fat than you would want to use.

So when I buy the meat, I usually process it first. Nothing major. First I would trim off the excess fat. There will always be a part where the meat is thicker than the rest. I will make it the same thickness by carefully opening it like a book.

This step will also expand the meat surface. Since I will be rolling the meat, so if I see there's some inconvenient shapes at one end (for example), I will cut it out and patch it somewhere so that the meat will have more or less a rectangle shape.

Other recipes like pizza matambre, uses the side with fat as the outside side. So it depends on what recipe you're making. Maybe I'll share pizza matambre recipe soon.

In this recipe I'm using the ingredients that my mother in law taught me, the way she has been doing it for more than 35 years. I thought I'd keep the tradition. You can, of course, add or use anything you like.

I'm using carrots, roasted sweet bell peppers, parsley, garlic, parmesan and salt and few grinds of black pepper as seasoning. I first sliced the carrots into strips and boiled them just until they were tender. Boiling them first ensures that they're soft and makes it easier to slice later when serving.

I used roasted sweet bell pepper. Also for the same reason as using boiled carrots, so that they're not hard. Some people use fresh bell peppers, to each his own. We just like it this way. The colors of the carrots and sweet red bell peppers make such a contrast and will be beautifully displayed after we slice the meat.

I also used parsley and garlic. I chopped them together, to make it easier. Then of course, a good amount of grated parmesan is always good. Don't forget about the boiled eggs. And that's all, the ingredients are really basic.

I know some people use gelatin and breadcrumbs in the filling. This is a recipe from at least 35 years ago so I doubt that my mother in law could find gelatin easily back then.

After having all the ingredients ready, it's all just about assembling. Lay the meat on a clean working surface, with the shorter end facing you. You will be rolling from that. Season the inside of the meat well with salt and black pepper, then sprinkle evenly chili flakes (if you like it a bit spicy), chopped parsley, garlic and parmesan.

Then starting at beginning of the meat nearest to you, leave around 2 inches empty space and start placing the red pepper strips in a line. Then do the same with the carrots. Leave a bit of space between the lines. Alternate between red peppers and carrots until the end.

Now comes the eggs. Place the eggs in a line, at the empty space before we arranged the first line of red peppers. Then carefully yet confidently, roll. Roll and roll tightly until the end. You can watch how to do this in the video below.

Once you have the meat rolled in a tightly log, it's time to tie and secure it. This is so that the fillings don't come out and the log maintain its shape. Use a kitchen twine and start tying from one end to the other. It doesn't matter how you tie it, just tie it tightly so that it's secured. You can also watch how I do this in the video above.

And then we will cook it.

Find a pot that's big enough to fit the rolled meat without having to bend it. My biggest pot almost almost fit my rolled meat. I did have to slightly bend it a bit. Well, no problem.

So fill half of the pot with water and add some salt and chicken bouillon powder. This is to give flavors to the rolled meat as we cook it. Back then people add in carrots, leeks and such in the water for the flavors. Well, bouillon powder is more convenient.

Bring the water to a boil. Then carefully place in the rolled meat. Fill the rest of the pot with hot water until the meat is totally submerged. It is very important that you totally submerge it during the entire cooking time to prevent it getting dark in color. Reduce the heat to simmer, cover the pot halfway through and cook for 1 hour. Add more hot water as needed.

After 1 hour, turn the heat off and cover the whole pot. Leave until the meat cools completely, inside the pot in the broth. Yes, it will take a few hours. Cooling the meat like this prevents it getting dry and dark.

After it has cooled completely, remove it from the pot and place it on a cling film. Wrap it tightly and keep it in the fridge until the next day. Yes, you serve it the day after. So the next day, simply remove the cling film and slice around ¾ inch thickness. Don't slice it too thin because then the filling will fall out.

Well and then there's nothing more to do than enjoy! Do share if you've eaten this before and how's your version of it. 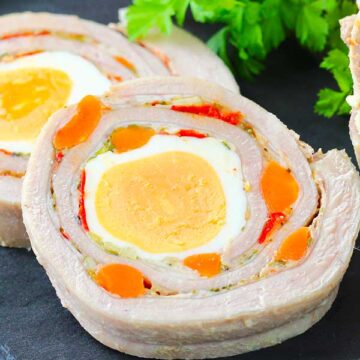