Home » Lighten Up » How to Make Steak Milanesa

Milanesa is a type of breaded meat that's then fried. It's originally from Italy and was brought to South America during the mass emigration back then.

The meat fillet can be either beef, chicken or even fish and eggplants. The fillet however has to be cut into a thin slice as you can see in the video below.

The fillet is usually dip in egg and then coated with bread crumbs before being fried. Each house has their own recipe and style of making milanesa, of course.

And today I would like to share how I learnt to make milanesa from my husband's side.

My husband Marco is Argentine and so are his whole family.

Milanesa is a very common dish that he always had as a kid, together with mashed potato. Back then my mother in law would always ask him "Do you want white puree or orange puree?"

Of course, his answer would always be a scream of  "White puree!!"

Now that I think of it, until now he prefers his milanesa with mashed potato.

I didn't know about milanesa until I married Marco. That's what I love about blending cultures, we learn from each other.

And I learnt how to make milanesa both from Marco and my mother in law. He said milanesa is one of the things that he learnt to make since he was a little boy. There's even a picture of him standing on a tiny chair so that he would reach the kitchen top, where he made his milanesa.

In this recipe I'm sharing the baked version of it, as my mother in law likes to prepare her milanesa now. A healthier version, you can call it.

The condiments are exactly the same as you would fry the milanesa but instead you simply bake them.

You do need to spray the milanesa with a bit of oil just to get that lovely golden brown color.

These milanesa don't take long in the oven since they're thin so keep an eye on them. Basically you're looking for the color since the fillets take no time to cook at all. So once you're happy with how they look, take them out and serve immediately.

There you go, a family recipe from ours to yours.

Hope you would give it a try as it's super simple and delicious.

By the way, do tag me in Pinterest and Instagram whenever you make any of my recipes. I would really love to see your creations! 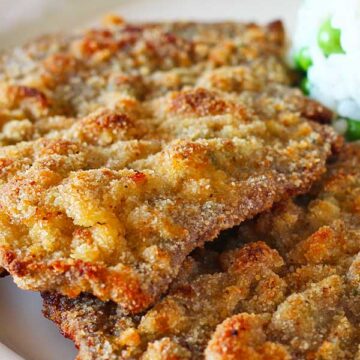 With this recipe you can learn how to make steak milanesa in the oven! Instead of frying I'm making them healthier by baking them in the oven.
Print Pin Rate
Servings: 6 milanesas
Prep Time: 10 mins
Cook Time: 6 mins