I'm so excited about this recipe!

I have been wanting to post this peanut butter chocolate cheesecake recipe for a LONG time but since the summer in my city is slightly cooler than the sun, so I thought I would wait until the temperature drops down a bit.

Which it has, in this past week.

So today I'm sharing with you this decadent and delicious no bake cheesecake. It's one of my husband's, Marco, favourite. Now that I think about it, apart from going crazy over dulce de leche he also is nuts about peanut butter.

Ok, let's move on to the recipe shall we?

There are 4 layers in this cheesecake. Yep 4 layers of goodness!

First is the base. I don't know about you but for me, the base is an important component in a no bake cheesecake as it gives the texture and that salty touch to balance out the sweetness of the whole cheesecake.

And then the chocolate layer. Ohh wow!

Do you know how difficult it is to restrain yourself from not taking a spoon (or two and three) of that yummilicious chocolate cheesecake layer when filming this video? Well it's very difficult, trust me.

Apart from restraining myself, I have to keep slapping somebody's hand (whose name shall not be mentioned, but he's the one behind the camera) from stealing some also.

And who says cooking is easy, eh?

So, I'm using semisweet chocolate (like this one) that I melt before I start making the cheesecake. This is so that the chocolate has a chance to cool a bit by the time I mix it with the cream cheese mixture.

Talking about cream cheese, let's remember to always use it at room temperature ok?

I chill the chocolate layer in the fridge for a while so that it gets a chance to set a bit before I start making the next layer.

Try use toasted peanut butter, it makes such a difference. I'm using smooth peanut butter to get that smooth texture. If you don't mind and prefer the crunchy peanut butter, then by all means use it.

I also heat the peanut butter a bit in the microwave to that it's a bit runny. This will make it easier when I mix it with the cream cheese mixture later. So a tip for you.

The last layer is the ganache.

For this recipe I wanted a slightly runnier ganache than my no bake oreo cheesecake since I want a simple finish to the cheesecake. No cream whatsoever on top.

A slightly runnier ganache enables me to get that smooth finish.

Well there you have it. Though there are several steps to this cheesecake, as you can see they are all super simple ones.

I really hope you'd give this a try. Let me know what you think. 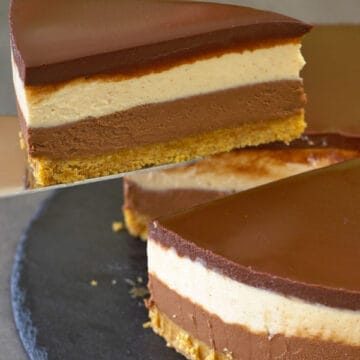 How Transfer To Serving Plate