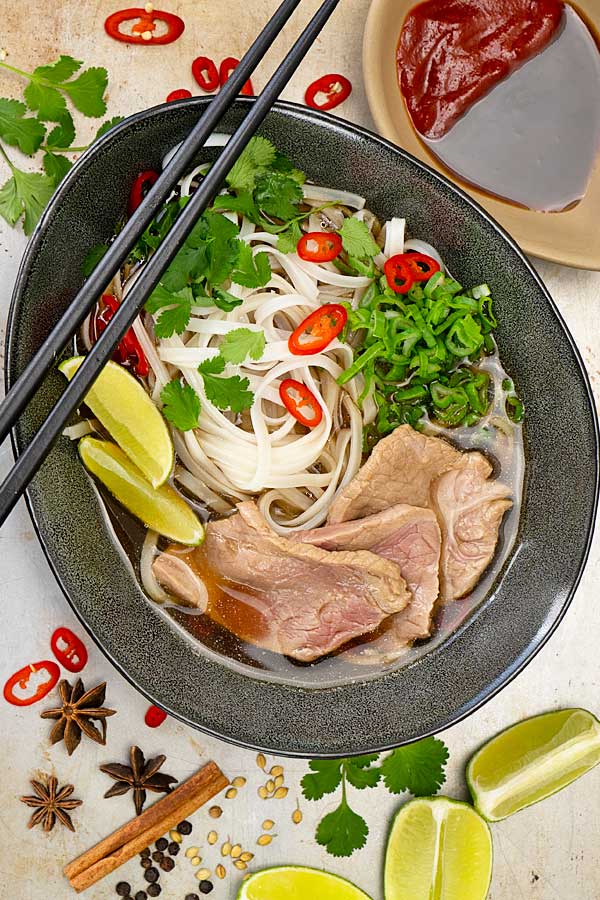 Pho, or pronounced as fuh, is a famous street food in Vietnam.

It's a hot thin clear soup that has been cooked with some spices. A bowl of pho usually have rice noodles, fresh herbs and a type of protein source that's usually either chicken or beef.

Preparing a pho soup especially the beef pho is time consuming as the soup is cooked slowly using bones and meat for up to 8 hours.

Today I'm going to share with you a quicker version of a beef pho. The one that you can enjoy in a mere 40 minutes.

What Is Quick Beef Pho?

Though a traditional way of cooking a dish definitely portraits the authenticity of a meal, sometimes we are restricted by certain things and in this case, time.

Let's face it, most of us don't have 8 hours to cater to a pot of simmering soup.

If you have the time then I would recommend you to go the traditional way. If you're anything like me, then quick beef pho.. here I come!

Instead of using knuckle and oxtail bones to make the soup, I'm simply using beef stock.

Changing to beef stock reduces the cooking time to a total of 20 minutes instead of 8 hours.

Use your favourite beef stock. You can also use water and beef bouillon powder or paste. Your choice.

Though we are extremely reducing the cooking time, we still want to preserve the essence of a pho, which is the spices and the charred ingredients.

Pho soup is different from other soups due to the spices that it has. They are cinnamon stick, coriander seeds, cloves, star anise and black pepper corns.

Don't be alarmed of the quantity of the spices. The soup will not taste pungently spiced. In fact, it tastes mild yet very flavourful.

I would really recommend you to dry toast your spices before using them as it will make a huge difference in flavours.

Some quick pho recipes even make it quicker by skipping this part. By that I mean not charring the shallots/onions and ginger.

I don't like to do that because I feel that's another part of the essence of a pho, the charred shallots and ginger.

Besides if you watch the recipe video below, you will see that it doesn't take long at all to charr them as I do it in the oven.

And in the meanwhile, I toast the spices.

In our house, we love ourselves some soups like this pho.

We always have family gathering in the weekends, and that means lazy day with the family, comfort food, amazing dessert and who knows what else we come up with that day. Haha!

And usually the day after I will prepare either beef/chicken pho or chicken soup. Just to start the week good, you know.

This beef pho soup doesn't have any fat. It has lean meat and lots of herbs. If you can find bean sprouts, use them also. I couldn't find any this time.

The thin clear soup is also soothing and kind to the stomach.

Give it a try and let me know what you think.

Here are some more similar healthy meals, if you're interested: 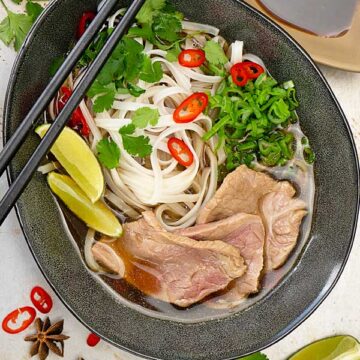 Variations Of Herbs And Veggies

Types Of Beef For Pho